Dr. Nigh is a graduate of the National College of Natural Medicine (now the National University of Natural Medicine, NUNM), where he completed both the Naturopathic Doctor (ND) program and the Master of Science in Oriental Medicine (MSOM) programs. Prior to studying naturopathic medicine, he attended the University of Notre Dame, where he received his Bachelor’s in English, and he then completed a Master of Humanities program at Arizona State University.

Prior to his work at Immersion Health, Dr. Nigh co-founded Nature Cures Clinic in 2001. It was during his early years of work there that he developed his interest and passion for researching and implementing alternative cancer therapies. It was also at Nature Cures Clinic that Dr. Nigh began a collaboration with Maria Zilka, which spanned his last 5 years of work there.​

Dr. Nigh (he prefers “Greg”) works very hard to be easily accessible to every patient in treatment programs with him. He spends a great deal of time with patients, always attempting to have a complete understanding of each individual, their personal circumstances and challenges, and the best strategy for implementing the appropriate treatment program. ​​​​​​

Dr. Nigh has been a prominent voice within the naturopathic profession. He has spoken several times at the annual convention of the American Association of Naturopathic Physicians on topics as diverse as naturopathic treatment of strokes, the use of hypnosis in clinical practice, and the use of energy medicine in the treatment of anxiety and depression.  He has spoken many times at the national conference of the Oncology Association of Naturopathic Physicians. Topics he has covered there have ranged from cancer cell metabolism, to .

Dr. Nigh attends and has spoken several times at the Conference on the Physics, Chemistry and Biology of Water in Bulgaria, where he has educated researchers from around the world about the unique role of sulfur in the maintenance of water structure in the body.

In addition to his work with cancer patients, he also works extensively with Lyme disease, mold toxicity and related illnesses, chronic fatigue and fibromyalgia, gastrointestinal symptoms including inflammatory bowel disease, and many other challenging conditions. He has received additional training in environmental medicine and in the use of chlorine dioxide as a therapeutic agent. He creates comprehensive detoxification and rebalancing programs, utilizing one of the widest ranges of therapeutic modalities available.

Dr. Nigh is a prolific reader, researcher, and writer.

He wrote about the metabolic treatment of cancer for the Townsend Newsletter, and he contributed a chapter to the upcoming two-volume Foundations of Naturopathic Medicine textbook. He has teamed up with MIT’s Dr. Stephanie Seneff to publish three peer-reviewed papers on the health consequences of exposure to glyphosate, the active ingredient in the herbicide Roundup (1, 2, 3). Also working with Dr. Seneff and other research scientists he has published one peer-reviewed (1) and one currently preprint (2) articles on the Covid-19 mRNA vaccines.

He also enjoys writing book reviews, essays, and even short stories. Topics of deep interest and ongoing exploration range from evolutionary biology, epigenetics, and the politics of science, to cosmology, metaphysics, zen philosophy, psychology, information theory and biosemiotics, current events and, of course, the biology and physiology of health and disease in general, and cancer in particular.

He is an active member of the following professional organizations:

(45 minutes in-office or via telemedicine)

Schedule with Dr. Greg Nigh

Important Notice: Dr. Nigh will no longer be in-network with any insurance panels as of April 1, 2022. Patients can be provided a Superbill after their visit, which can potentially be submitted to insurance for out-of-network coverage. To find a list of insurances Dr. Nigh accepts through the end of March click here

Check out Dr. Greg’s book: The Devil in the Garlic

Can an innocent bit of garlic be responsible for your allergies, skin issues, anxiety, digestive problems or hot flashes? Garlic, kale, and other foods high in sulfur can lead to challenging health issues, chronic disease and possibly even cancer, in people who can’t metabolize sulfur. 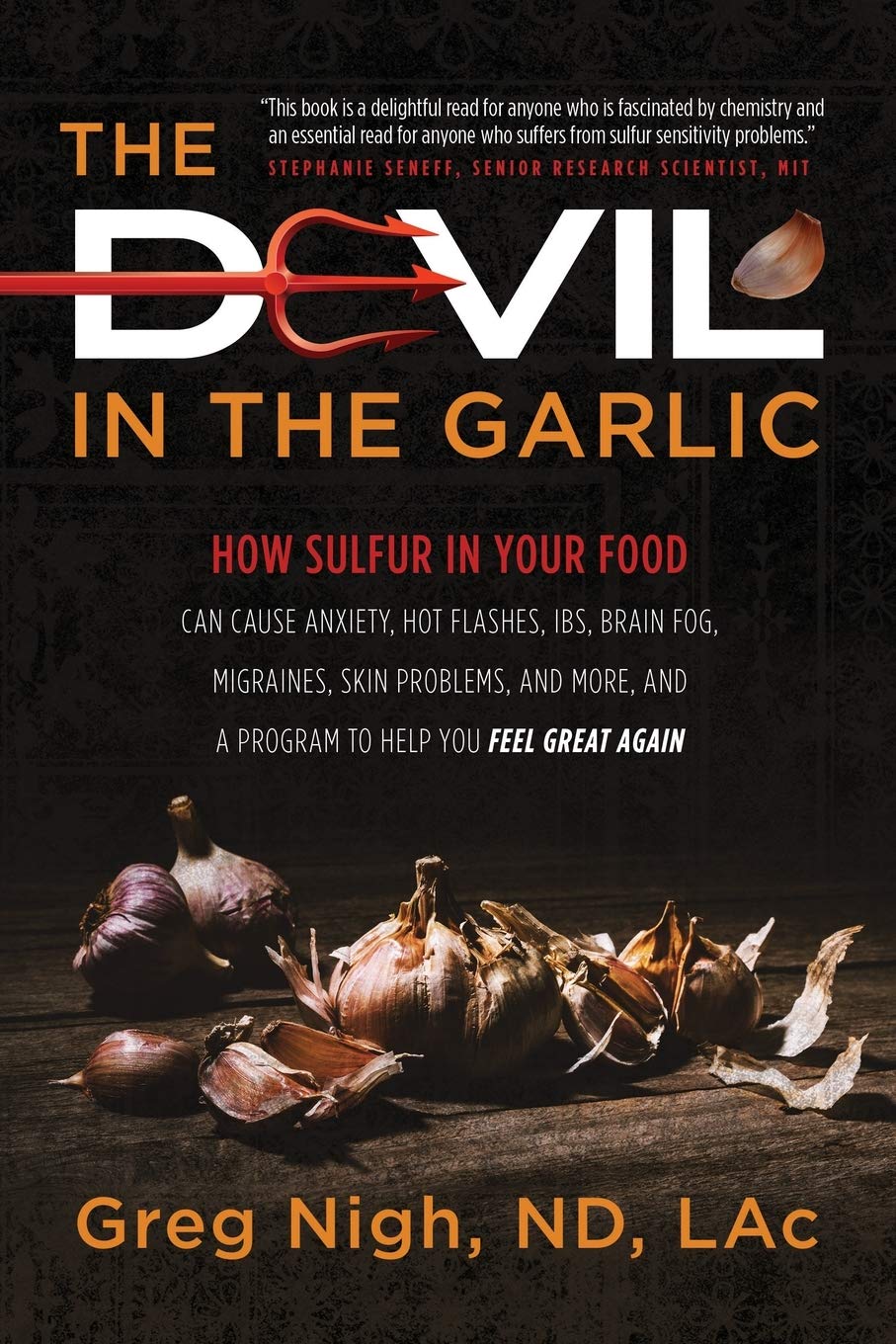